The Monsters of Everlock (special episode)

Wille is one of the Carnival Master's guardians. He has four heads that represent joy, anger, sadness, and fear respectively. He is played by Dan Aho.

Willie is a deadbeat insurance seller who's wife believes he was the greatest mistake of her life. When the Carnival Master arrives in town, he gives Willie the Psychedelic Swirl. He turns it and gains three extra faces, then he kills his wife, Betty. He now runs the Funhouse, and has the guests go into the three rooms within the Funhouse to retrieve two light bulbs. Later, Nikita and Manny were voted into the Funhouse Challenge. Nikita wins, but Willie kills Safiya instead because Safiya voted for Nikita. 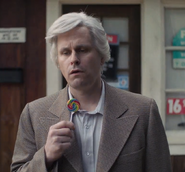 Willie as a human.

Willie from The Monsters of Everlock special episode.
Add a photo to this gallery

Retrieved from "https://escapethenight.fandom.com/wiki/Willie?oldid=25671"
Community content is available under CC-BY-SA unless otherwise noted.