The Masquerade Part I

Tyler Oakley, nicknamed The Thespian, was invited to a masquerade ball in the Victorian Era by The Sorceress, who was possessing Joey Graceffa at the time. Tyler is later voted into the Baking Room Challenge against Liza Koshy, a challenge that he wins. The Werewolves then force him to run The Gauntlet, and he comes safely in 2nd place. He is then chosen by Andrea Russett to be her partner in the Dark Dimension Challenge against Joey and Alex Wassabi. Andrea survives the challenge. After Joey is killed by the Sorceress, Tyler is the one who wears The Crown Of Oblivion and reverses the Sorceress’s evil from the Victorian Mansion. He returns home alongside fellow survivor Andrea, unaware that the crown would revive Joey.

Episode 1 - The Masquerade Part I

Tyler is one of the people to receive an invitation to Joey Graceffa's party at a beautiful estate which was trapped in time and the only way to travel there was to take on a persona from the Victorian Era accordingly so the carriage can take you across time and travel to the house.

A man by the name of Randal is being seduced by Kira and Haruko he then asks when he can see the gem they say he can see it later and that a guest would be joining them soon (unbeknownst to Randal it would be Jorogumo) they then tie him down he wakes hours later as Jorogumo crawls onto him and begins to devour him.

Being male, Tyler is not eligible for the Spider Web Challenge.

During the Civil War

There are 2 warriors fighting the enemy as they hear someone screaming in pain suddenly the enemy appears out of nowhere and is holding a decapitated man's head then the second warriors is worried so he tells the first warrior they need to get out of there however the first warrior sticks his ground. He then shots at one of them leaving a hole in their stomach however it instantly heals. Then the warrior fights another one when a hooded figure comes out holding a energy arrow asking how long he would resist them to which he replies forever shooting 2 of his guns north and south.

Tyler is chosen to play on the side of the Dark Army. They win and are safe from elimination in that round.

Tyler is one of the two guests to be voted into this challenge, the other being Liza. He wins, but Liza and him are both saved by Sampson, who pushes the Gingerbread Woman into the oven.

Tyler is not selected to walk the Path of Betrayal; however, he is unknowingly up for elimination in that challenge, the others being Alex, Gabbie, and Tana. Tyler is spared due to him proving himself helpful as are Gabbie and Alex. Because of her loss in the Spider Web Challenge, Tana is chosen to be betrayed by Andrea and Joey. Her plate is smashed and she is slain in the stomach.

One Week Ago
Cedric is seen putting his robotic heart in his Automaton Bride she suddenly comes to life and begins to dance with her creator until they kiss and he gives her a ring and she telling him she loves him just as he is about to say he loves her too. She malfunctions and Jetpack Girl asks what happened Cedric then claims someone sabotaged him and telling her she is no longer needed. He then begins to cry on his bride's shoulder.

While not selected for elimination, Tyler's life is put at risk when he accidentally steps on a landmine. The group has five minutes to shoot down twenty small targets in order to deactivate the system.

Tyler is seen waiting with the others in the lounge for midnight to come which is in less than five minutes. Finally midnight arrives and a chest opens with a note from The Sorceress saying

"It's midnight in the garden of evil, and it's time we escalated the stakes, My lieutenants are no longer waiting to be found. They're coming for you."

when suddenly someone starts pounding on the door terrifying all of them. Alex then decides they should open the door and try to help the man. He then runs into the lounge and says that he needs their help his son is going to die if they don't do something. He then explains that they were attacked by werewolves startling everyone Allison then asks why he then says that he took a gem from them showing the group. He then says if they save his son he will give the gem to them they then all willingly agree and follow him outside with lanterns to find quicksilver and wolfs bane to cure his son. They are then told that there is a map down near the fountain where they can find the wolfs bane. They arrive at the fountain and they start looking around and find a chest. They then need to find 3 keys to get the map which is inside this chest. Joey then begins to grab pots and smash them on the ground trying to get the keys. Then Joey finds one of the keys in the fountain. Then Tyler finds another one of the keys in the dirt. Andrea suddenly finds the third key in another plant pot. They then unlock the chest and begin to read the map then suddenly a werewolf comes out of nowhere and tries to attack the group, luckily they get away. They then find a carriage with a chest inside it this time with a combination. It then says only the horses can see immediately everyone pretends to be a horse and try to figure out the clue then they find blinders which answers the clue they now have the wolfs bane. Then there is more of a note "We stashed a safe in the trees along this road to hold the quicksilver we took from the southern bank." Then they start walking when Joey discovers the safe than on it there is another note saying "I've never seen anything like quicksilver before. To keep my men from stealing it, I split the combination into three parts hid one here, another in a greenhouse under the moon, and the last one is in the stone path where you need to keep an eye out for traps." They then split up into three groups Alex and Andrea go to the greenhouse Joey and Tyler take the stone path and Allison and the man check for the one that was where they were. Also if a werewolf comes you have to hide or he'll take you. Then Joey and Tyler while walking the path form an alliance. They then find a mutilated rabbit which they need to dig into it's mutilated body to find their next clue. Then they get out the scroll and begin to read "Butch always liked.. when suddenly the werewolf comes out they then hide he then runs away. They continue reading "Butch always liked to keep a certain number of bullets on him, thought it made him lucky. They then find a trap which lowers a bag full of items including a belt full of bullets they then count how many there are 11 then Allison's and the man had 13 while Andrea and Alex had 27 then Tyler suggest they should split the numbers down the middle and it works. They now have the 2 items required to heal the Atticus' son. They reach his son and have to put the quicksilver and wolfs bane and mix it together then put it over his wound then the boy warns them that they need to run because his father is a werewolf then they are surrounded by him and another werewolf then Allison demands he give them the gem because they did what he wanted. They are then told they have to run the gauntlet which is a four part obstacle course and whoever is last will be devoured by the werewolves. Then Allison, after Andrea loses, sacrifices herself so they can get away with the gem. They then go down the red hallway the elevator opens and the Devourer comes out running after them.

Tyler is not up for elimination, as he is Andrea's partner.

Tyler is the one who wears the Crown of Oblivion after Joey's Demise and sets the house free of the Sorceress' curse.

Tyler as he appears in the Season 2 opening.

Welcome to the Ball.

Tyler in the Baking Room Challenge.

Gabbie,Tyler and Alex over Tana's body.

Tyler votes for himself.

Hiding from the Werewolves.

The Werewolves are coming!

Tyler finishes second in The Gauntlet.

The guests meet the Devourer.

"Who touched my wine collection?"- The Sorceress 2017

Tyler votes for himself

"This was a dinner, the dinner we came for."

Tyler uses The Crown of Oblivion to remove the curse on the Victorian Mansion. 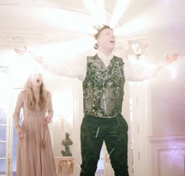 A heavenly glow on the survivors!

Tyler and Andrea Russett leave the Victorian Mansion after surviving the night.
Add a photo to this gallery

Retrieved from "https://escapethenight.fandom.com/wiki/Tyler_Oakley?oldid=25095"
Community content is available under CC-BY-SA unless otherwise noted.