If you are looking for the character with the same role, go here.

S1: Shot through the head while playing Russian Roulette

S4: Beaten to death by the Garuda

Timothy DeLaGhetto, nicknamed The Mobster, was invited by Joey Graceffa to dinner at his new Estate, which could only be accessed by traveling to the 1920s. Tim learns that the house is haunted by an ancient Evil that has locked the estate in time. He is voted into The Circus Tent Challenge against Oli White. However, both of their lives are spared by The Ring Master from the return of his circus’s greatest act, Sam, The Behemoth from Beyond. He is next voted into the Doll Room Challenge against Matt Haag, a challenge that he wins as Matt get‘s a little too confident over his doll placement, causing him to drink poison. The very next episode he is yet again voted into a challenge, this time being the War Front Challenge against Eva Gutowski. The challenge was a mix of the game Battlefield and Russian Roulette. The game ends with Tim shooting himself in the side of the head, killing him instantly. Tim, renamed The Con-Man, later wakes up inside the Museum of the Dead after being set free by Joey and Bretman Rock. In Episode 3, he and Destorm are sent into the challenge. When Destorm ends up being the victor, Timothy is then beaten senselessly by the Garuda, killing him for the second time.

Timothy is one of the ten YouTubers invited to the 1920s by Joey Graceffa to attend a dinner partner at the Estate. When Shane gets poisoned. He, along with, Andrea, Justine, Sierra have to find the key in The Library. But fail to do so in time. Causing Shane to die. When the group go to Shane's body, Lele is suspicious of Timothy since his role is a mobster. In which he responds that he doesn't kill his friends, only people that own money to him.

Timothy becomes angry with Justine after she fails to save Andrea from the Ungodly Machine. When it’s exposed that one among the house members are in league with the evil, he believes it’s Justine.

Timothy continues to accuse Justine of being with the evil, ultimately being one of the main contributors in getting people to vote for her to be buried alive.

Timothy pulls over Sierra to investigate a suspicious car that had appeared near the house. While investigating, he discovers the fifth mannequin required to solve the dinner for five puzzles created by Calvin.

Timothy attempts to distract Sam, the house’s guardian, but trips on wet grass, causing him to get captured. Later, he’s one of the two voted in to take part in the Circus Challenge for the final artifact. He survives the challenge after being spared by the Circus Leader.

Timothy along with Lele, Matt and Sierra go to the window room on the second floor to find the holy water to prepare for the exorcism.

Timothy is voted into the Dollhouse Challenge to obtain the Mermaid’s Doll, along with Matt, where they get poisoned and have to put dolls in a correct place on a toy mansion to get the antidote. Matt finishes his first and believes that he is right, however, he did it wrong and Timothy survives the challenge, while Matt dies.

Timothy is chosen to do Battleship Russian Roulette. He and Eva are forced to pull the trigger every time their "soldier" on the field is hit. When Timothy's ship is chosen he pulls the trigger and is unfortunately shot in the head. This saddens Eva

Some fans speculate, in connection with his final confessional, that he lied to Eva about his soldier being hit and chose to take the shot himself.

Timothy escapes from his exhibit in the Museum of the Dead, with the help of Joey and Bretman. When Alex, Ro, Colleen and Justine get captured, he and the remaining Youtubers encounter the Sorceress, who tells the group that although she's mad at Joey, she is also on their side as she too wants to escape the museum. Timothy then groups up with Destorm and Tana, as they work together to find the Ruler's Rod. After finding the rod they reunite with the rest of the group. By combining the rod and the relic Joey found, the group makes a staff that can control the guards (Timothy suggesting they make them dab). Using the staff, Joey commands the guards to go into the Rotunda and the group returns to the lounge. Later on, Timothy and the rest of the group releases the Mummy and the episode ends with them running away from it.

Timothy and the group enter the Sands of Egypt and meet the former wife of the Pharaoh. Later on, he and the group begin deciding on who to send into the challenge. Timothy decides not to vote for Bretman, due to him being his "Asian Brother" (Bretman still votes for Timothy though). Timothy doesn't go into the challenge however, instead Tana and Justine's cards get pulled. When Tana returns from the challenge, Timothy is overjoyed.

In order to defeat the Garuda and retrieve the second Jeweled Key, Destorm and Timothy are both sent into the challenge (due to them having the fewest amount of coins out of everyone there). The challenge required Timothy to find four blue gems, while Destorm had to find four red gems. When DeStorm wins, Timothy calls him evil (and claims that he stole his wallet). Timothy is then beaten to death by the Garuda and dies again.

Tim arrives at The Estate.

Tim as he appears in the Season 1 intro. 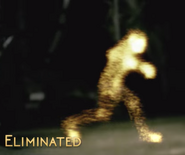 Timothy is tagged by The Guardian and is eliminated 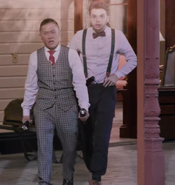 Tim and Matt Haag returning from their elimination

Tim in the Circus Act Challenge.

Tim and Matt Haag in the Dollhouse Challenge. 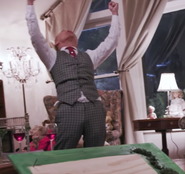 Timothy after winning The Dollhouse Challenge against Matt Haag

Tim in the War Front Challenge.

Timothy in a glass case.

Timothy is freed from his glass case.

Tim as he appears in the Season 4 intro.

Timothy at the Season 4 lounge.

"And you stole my wallet!"

Timothy's second death.
Add a photo to this gallery

Retrieved from "https://escapethenight.fandom.com/wiki/Timothy_DeLaGhetto?oldid=28943"
Community content is available under CC-BY-SA unless otherwise noted.