The Police Station is where the Strong Man holds his prisoners.

The Everlock Police Station is a small single-story building consisting of a single room only divided by the Jail cell. As it is small satiation it seems to only have one officer on staff that became the Strong man.

The Everlock PD use both nightstick and handguns as the Strong man is seen to have sheaths on his belt for Magazine clips. They also have a single patrol car for official use.

The Offical uniform for the Everlock PD is like most police departments were there are two sets of Uniform one for Summer and the other for Winter. The Summer uniform for the Everlock Pd is a pair of Black dress pants, with black business shoes and a light blue button up with short sleeves and black accents with the everlock crest on the sleeve, along with a black tie. The Winter Uniform is about the same except the Shirt is a darker blue with long sleeves.

The Strong Man put Rosanna and Safiya in the police station where they found one of the Lazarus Coins and part of the Demonic Configuration. 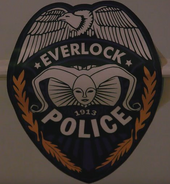 The Offical Crest of the Everlock PD

Spring Uniform/ Wilmer Jones
Add a photo to this gallery
Retrieved from "https://escapethenight.fandom.com/wiki/The_Police_Station?oldid=11061"
Community content is available under CC-BY-SA unless otherwise noted.