Protecting the Museum of the Dead

The Egyptian Guards patrol the Museum of the Dead, looking for people outside of their exhibits. They can be controlled using the Pharaoh's staff. They are currently under the control of Joey Graceffa There are three guards, one lieutenant who is deceased, as he was slain by The Sorceress. They are played by Marcos Jane, Andre Dos Santos, and Jawed El Berni.

The Egyptian Guards were looking around the Museum of the Dead for Liza when she escaped from her exhibit. She ran into a room to find The Collector's Jar of Souls, with previous guests' souls for The Collector to feast on in. She sees Joey on a crystal, and can communicate with him, so she says that they need help. She is then cut off as The Collector walks in, and asks what she was doing outside of her exhibit. She stabs Liza with her staff and collects her soul.

After Joey frees eight of his deceased friends, they are about to try and leave when the guards block their way. Rosanna makes a joke on how maybe they are in heaven when she sees them. One guard walks over to Alex, he steps back before punching the guard, the guard tries to punch back multiple times, but Alex tackles him to the ground, as Alex tries to punch him again. However, another guard pulls back Alex, and captures him. Justine tries to get away, but is unsuccessful as a guard grabs her. Then Ro is also caught, and Colleen is caught too. The four of them are dragged into a cage, where Colleen and Ro re-unite with Mortimer. When Justine finds a box, the group investigates it. A guard then says "I told you I will cut out your tongue."

The Sorceress sees a guard outside the window to the place where she and the guests that aren't captured are in. She says that the guards obey whoever is Pharaoh, and the symbol they found on the bottom of a note is his sign. She says that she has seen it, and for the guests to follow her. DeStorm and Tim are sceptical about her. Tana, DeStorm and Tim follow The Sorceress to the place she said she saw the symbol. When the three of them are trying to solve a puzzle, Tim notices that a guard is coming, and tells Tana and DeStorm. They run up stairs to remain out of sight.

When Joey has the staff that the Pharaoh has, he realises that he can command the guards to do what he wants them to do. Him, along with the other guests, go outside to go over to the guards. They kneel down when he comes near, and all of the guests are impressed by this. The Egyptian Lieutenant asks what he commands, Tim suggests to have them dab and Colleen is unsure but suggests for the guards to help them. Joey commands the guards to go into the prison, where his friends were locked up. The Sorceress points out that there is a key around his neck. Joey takes it and then commands them again to go to their prison. The group goes away, but The Sorceress stays behind, and Mortimer notices. She takes out her knife, and walks over to The cage that the guards are standing in. She stabs The Egyptian Lieutenant, and says that the Museum of the Dead should be her's. She takes out the knife, killing the Lieutenant. Mortimer walks away after seeing this. The rest of the guards remain standing in the prison, under the command of Joey. It is unknown what happens to them after this. 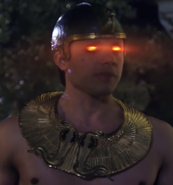 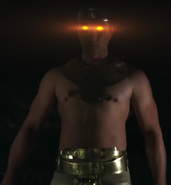 The Collector ordering the guards

The Sorceress stabbing The Egyptian Lieutenant

Retrieved from "https://escapethenight.fandom.com/wiki/The_Egyptian_Guards?oldid=24333"
Community content is available under CC-BY-SA unless otherwise noted.