The Collector is the main antagonist of Season 4. She runs the Museum of the Dead, collecting the guests that died in the past and displaying them. She is played by Shiobann Amisial.

She takes Liza Koshy's soul after she breaks out of her case. She opens a portal to Everlock, to obtain more exhibits for her Museum.

The Collector once ruled a kingdom among the living, but she wanted to break the circle of life and gain immortality. She discovered the secret of eternal life with the Cosmic Sphere. She then used her powers to collect the souls of people and monsters from various eras and keep them at her Museum of the Dead, which is located in Purgatory.

Garuda flys a woman down from the sky and then stands while she wanders his nest claiming that her brothers will not be happy that they left them. However before she can run, Garuda slits her throat and takes the ruby red stone she had. The Collector appears and admires his gold and takes a single coin to which he demands she return it, despite her saying that he had so many. He then tells her there were complications collecting the stone and that payment had been doubled. The Collector unbothered by this pours a sack of gold into a chest and tells him that there are always complications. He then hands her the stone where she tells him that someday a demon will come looking for his corrupted soul and drag the Garuda's soul down to hell - This demon later to be Kali

The Collector appears to The Black Knight telling him to summon The Gorgon once he has slain King Arthur and taken the Sword of Excalibur from him so she can add it to her collection. She then disappears as he goes to kill Arthur.

The Collector appears in The Gorgon's lair presenting her with a medallion to control The Minotaur and she will not be able to turn him to stone like all her other victims and she can do whatever she pleases with him. However The Gorgon gets angry at this claiming that she doesn't need the medallions help to control people and telling The Collector that she made her this way with The Collector angrily telling her that she choose this when she decided to follow her and then storming away leaving the medallion on a pedestal.

Episode 7 - Be Careful What You Wish For

The Collector appears in The Genie's room, after Scheherazade, uses her storytelling abilities to capture him. The Collector calls him an "animal that belongs in a cage".

The Collector returns back to her Museum of the Dead, after finding out the All Stars have caused havoc among it. She demands the final All Stars to return to their exhibits, but has a battle with The Sorceress first. She is killed by the Sorceress after losing the battle. 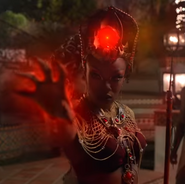 The Collector opening a portal to Everlock 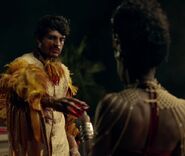 The Collector and Garuda

The Collector instructing The Museum Guards

The Collector fighting The Sorceress

The Collector as she lost the fight

Retrieved from "https://escapethenight.fandom.com/wiki/The_Collector?oldid=26376"
Community content is available under CC-BY-SA unless otherwise noted.