Mordred (according to Arthurian Legend)

Keeper of the Black Knight's Key

A Wedding To Die For

Dark Magic and A Twisted Fate

The Black Knight is one of the creatures in the Museum of the Dead. He works for the Collector and is a minor antagonist in Season 4. He kills Tana Mongeau and Gabbie Hanna, then is slain by Colleen Ballinger. He is portrayed by Evan Strand.

Episode 4 - A Wedding To Die For

He is released when Alex opens the third lock on The Collector’s Vault. They hear his voice and he tells the guests that death is coming for them, scaring them. The episode then ends there, teasing The Black Knight's arrival.

In the flashback, The Collector visits him, and marks a red-cross symbol on his face. We then see him stab King Arthur as he wishes to claim the sword, however, Arthur is able to seal the sword in the stone. The Black Knight then stabs Arthur again, this time, killing him. He is unable to remove the sword from the stone.

The Black Knight meets the guests and asks to who dares seek the sword of Excalibur. The guests say them and he tells them to leave his kingdom or die. When they don't move, he chases after the guests and captures Gabbie and takes her away, as she wasn't fast enough to run away from him.

The guests find a spell to free Merlin, when The Black Knight shows up and the guests run away before he can see them. He holds a sword up to Merlin and asks where they are. When he calls him an 'old man', Merlin corrects him, saying that he is actually getting younger. He keeps on making jokes, and The Black Knight doesn't like this. Eventually he gets annoyed and walks away, after Merlin says that The Black Knight will have messed up the exhibit.

When The Black Knight appears again, he tells Merlin that he sees that he has left his exhibit. Merlin uses magic to battle against The Black Knight, giving time for the guests to run away. During the challenge that Gabbie and Tana were voted in to, he notices them and goes over to them, asking what they are doing here. They ran into the green light of protection. He goes over to them multiple times, trying to stab them with his sword, however, the green light of protection makes it so that he can't get inside of it and the girls are safe there, yet the puzzle is outside of the green light and the protection is up for 5 minutes. When the green light disappears, They have nowhere to hide and nothing is protecting them, as the spell wore away.

The other guests arrive to try help their friends and then he stabs Tana, killing her as the guests watch on in horror. He looks over at Gabbie, and starts walking towards her, the guests shouted for Gabbie to run, yet she isn't able to and The Black Knight stabs and kills Gabbie as well. The guests are shocked that he killed two of their friends. He goes over to the other guests, but Merlin holds him off. While they are battling, the guests had to finish the puzzles themselves. When finished, the tears Lady of the Lake appears. Colleen goes over to retrieve it and becomes the next king. He stabs Merlin, killing him, while Colleen is pulling out the sword. Colleen and The Black Knight fight to the death, resulting in Colleen slaying The Black Knight and taking his jewelled key. With The Black Knight's last breath, he blows a horn. It turns out that when he blew that horn, it summoned The Gorgon.

The Black Knight is used in stories for any character that hides their identity and doesn't show any allegiance to any house of nobility. As such, black knights are often seen as evil beings who will do what they want, when they want, even if it's against the law. They are usually the opposite side of the coin when compared to white knights (the knights-errant), or men of honor, valor, and integrity. Black knights appear most often in books about King Arthur and his Knights, but they appear in other medieval period works. These characters can represent darkness and death, but there have been times where the term "Black Knight" is given because of the armor or the knight's skin color rather then the man's deeds.

In the Arthurian Legend, Mordred was the illegitimate child sired by Arthur and Morgause. He grew up with his half brothers and they all eventually became Knights of the Round Table. However, Mordred disliked Arthur greatly. When given the chance to look after Camelot, Mordred took power and ran the queen out of the city and into hiding. What followed after was a bloody war that would end with both Arthur and Mordred dying at each other's hand. 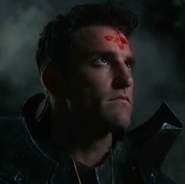 Retrieved from "https://escapethenight.fandom.com/wiki/The_Black_Knight?oldid=23820"
Community content is available under CC-BY-SA unless otherwise noted.