Member of the Society Against Evil

Nikita Dragun, nicknamed The Troublemaker, was invited by Joey Graceffa to save the Town of Everlock from The Carnival Master. She immediately shows herself as someone not afraid to say what’s on her mind. This causes her to be voted into the Snake Mosaic Challenge against Roi Fabito, who she pressured into knocking over the Serpent’s Tower. She wins the challenge, however, and Roi is killed by the Snake Woman. She later votes for Colleen Ballinger to enter the Maiden of Madness for accusing Joey, being one of the ones who pushes her in. She is then voted into The Funhouse Challenge by Safiya Nygaard against her best friend, Manny MUA. She wins the challenge, and is distraught over the fact that Manny would die, however, Safiya is killed for voting Nikita in instead of Manny. She and Matthew Patrick get into an argument over Safiya’s death, as Safiya was one of Matt’s best friends, while Nikita was angry she was voted into the challenge. She is then the only one who avoids getting cursed by The Witches. The next episode, she is yet again voted against Manny, beating him yet again. She is forced to shoot him to win, while he begs her not to, she tells him she loves him and shoots him six times while crying. Nikita ends up surviving the night alongside Joey and Matt. Alongside Joey and Matt, she then joins the Society Against Evil as they come up with the plan to rescue their dead friends from The Collector‘s Museum of the Dead. She also decides to recruit her friend Bretman Rock to join the mission, even though Joey told her not to. After the portal to Purgatory is opened, it closes before she is able to enter. She and Matt later temporarily gain access to the Museum after the surviving guests use the Guardian Angel Stone. She reunites with Joey and Bretman and has a brief discussion with Colleen about what happened last time they saw each other when she died. She is later chosen by Alex Wassabi to be his partner in The Minotaur’s Maze Challenge against Colleen and Matt. Colleen is ahead, but Nikita pushes over her puzzle, sending her to the beginning of the challenge, leaving her no chance at winning. Matt’s magic runs out and is teleported out of purgatory. Colleen is then killed by The Minotaur. She returns to the group with Alex before telling them that she can feel her magic depleting and she’ll be forced to leave soon. She then promises Bretman that she’ll save him. She watches Joey and Bretman compete in The Story Challenge, which Bretman loses. However, Bretman survives the challenge, which she is relieved about. However, her magic runs out, and she begins to fade out of purgatory, telling them not to give up and to survive before she is teleported back.

Nikita arrives at Everlock on her roller skates. She meets a man called Mortimer, who flirts with her. She finds out that his mother is the Mayor. The Mayor is killed by Killer Clowns, and Mortimer guides the group Nikita is in to look for clues. At the end of the episode, everyone is caught, and a Killer Clown rolls a dice. Whoever is to be killed is decided by what number the did lands on. It lands on a number, and the clowns say that it means they will kill Nikita.

Before Nikita is killed, Mortimer starts shooting the clowns, and they leave. Nikita, along with JC, Teala, Joey, and Colleen sneak into a clown disco to retrieve the song needed to cleanse the Jack in the Box. Nikita takes a sedative from Mortimer so the group will be able to render a clown unconscious if necessary. The group notices that one of the killer clowns is holding a briefcase, as well as a drink. Joey asks the clown for a sip of their drink, and Nikita pours the sedative in it. After a few minutes, the clown starts to feel sick. The group takes her outside, where the clown then passes out. While the group tries to figure out the code on the box, Nikita starts dancing with the Killer Clowns to distract them. After the challenge, Nikita tells Joey she thinks JC proved himself. Nikita decides to vote in Teala because she believes Teala hasn't done much and is jealous of her outfit.

Nikita talks down Roi, causing him to lose the Jenga contest and enter himself into the challenge. Nikita is voted into the challenge. She ends up winning, and Roi is then killed by the Snake Woman. She takes the artifact, and goes back to the group.

Episode 4 - The Man with No Name

Nikita is chosen by Manny to join his team in searching for the fingers, and after her team winning the challenge, becomes immune to voting for the episode.

Nikita is immune from voting due to her being a girl and becomes sad when Manny is voted into the challenge. However, after Manny survives, she becomes ecstatic at his success.

Nikita risks her hand being cut off in the challenge of fear. She, along with Joey and Rosanna, reveal their votes for Colleen. After Colleen is drawn, Nikita shouts, "Grab her!" She and Joey push Colleen inro the Maiden of Madness, killing her.

Nikita is voted into the Funhouse Challenge by Safiya. Nikita wins, which means Manny is supposed to die, but in a turn of events, Safiya is killed for voting Nikita in instead. Matt and Nikita then get into a fight about her attitude towards Safiya's death.

Nikita is the only one who isn't cursed by the witches and forced to participate in their challenge. She expresses concern/grief when the group returns without Rosanna.

Nikita is encouraged by her friends to put on the collar artifact (without its rings), turning her evil for a short period of time by Lucy. Nikita is voted in along with Manny in Lucy's challenge. Although Nikita struggles with the challenge, in her 2nd box, she finds a pink gun with a letter reading:

"KILL YOURSELF OR KILL YOUR FRIEND TO CLAIM THE RING. YOU DECIDE HOW THIS ENDS."

She shoots Manny and retrieves the last ring. She seems severely shaken by having to kill her best friend. Joey and Matt comfort her afterward.

Nikita escapes the night and leaves Everlock along with Joey and Matt. While leaving she mentions that she's gonna miss Manny.

She meets up with Joey and Matt for their plan to save their deceased friends. She then reveals that she invited Bretman Rock over to help, which Joey isn't happy with because he told Nikita not to invite anyone. When the portal opens up she tells Joey and Bretman "Go bitches". Before She and Matt enter the portal it closes.

Nikita returns with Matt, to help the guests, however, their magic will eventually run out and teleport them back to where Ryu and Jael are. Colleen is not too happy to see Nikita, since the last time she saw her, Nikita shoved her into The Maiden of Madness, along with everyone else there other than Matt, as he wasn't alive at the time. When the guests need to split up into groups, she asks who is going with her to save Alex. Bretman and Joey go with her. Alex is kept in a maze, and they can't be seen by The Minotaur. She manages to knock down the first of 3 gates needed to free Alex, however, she is spotted by The Minotaur and brought to where Alex is. They begin to fight on telling Bretman what to do, and he decides not to listen to either of them. He gets the second gate down, but is captured as well. Joey gets the last gate, and frees Nikita, Alex and Bretman. When Colleen and Alex are selected for the challenge. Nikita and Matt must help whoever chooses them. Colleen is able to select who to help her in the challenge first. She chooses Matt, since Nikita shoved her into The Maiden of Madness. Alex is left with Nikita, despite fighting earlier. In the challenge, Nikita and Matt must collect the pieces for a building and Alex and Colleen must build it. Colleen is about to win when Nikita knocks her structure over. Colleen is clearly angry at her for this. Alex ends up building it first, as Matt is teleported back. Colleen then has her bones crushed by The Minotaur. At the end of the episode, Nikita is still there, yet she says that her magic could go at any second.

Episode 7- Be Careful What You Wish For

Nikita's magic hasn't ran out yet, so she can help the guests a bit more this episode. When splitting up, Nikita goes with Bretman, to try spicy food. In the death challenge where Joey and Bretman must finish a story, Nikita is the only one to vote for Bretman to win, with Ro and Alex voting for Joey. When Scheherazade asks Fatima to write Bretman's name down, she writes down Scheherazade's name instead. The Thieves attack Scheherazade and kill her, meaning Bretman is allowed to live. At the end of the episode, Nikita's magic runs out, going back to where the Society Against Evil are. She tells them that she thinks they'll be alright.

Nikita Dragun alongside Rosanna Pansino and The Snakewoman for the thumbnail for Episode 3 Venomous Affections.

Nikita Dragun alongside Manny Mua and Willy for the thumbnail for Episode 7 Funhouse.

Nikita Dragun alongside Manny Mua and the Demon Dog for the thumbnail for Episode 9 Control Issues.

Nikita Dragun alongside The Minotaur and Matthew Patrick for Episode 6 The Maze of Terror.
Add a photo to this gallery

Nikita being possessed by a spirit of Everlock

The Troublemaker is a gamer 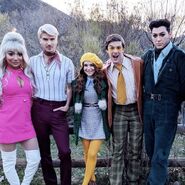 Joey telling Matthew Patrick and Nikita he has to do something

The Society Meeting Up. 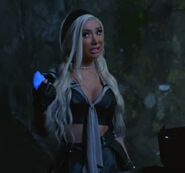 Jael and Ryu informing Nikita, Matt, Joey, and Bretman about the Collector's Museum of the Dead.

Screenshot of Nikita and Matt appearing in Season 4.

Nikita running from The Minotaur.

Nikita votes for Joey Graceffa to lose The Story Challenge.

Nikita’s magic runs out and is teleported out of the Museum of the Dead.

Nikita returns to the land of the living.
Add a photo to this gallery
Retrieved from "https://escapethenight.fandom.com/wiki/Nikita_Dragun?oldid=21653"
Community content is available under CC-BY-SA unless otherwise noted.