Keeper of the Pharaoh's Key

The Museum of Death: Part 2

The Mummy is one of the Collector's monsters. He is a minor antagonist of Season 4. He is played by Alexander Ward.

The Mummy is awoken by the guests. It turns out that he is angry at being betrayed and murdered by his wife, but views everyone as an enemy. He is one of the nine Keeper of the Keys.

The Mummy waking up is in reference to the Mummy's Curse, where the mummy would wake up to punish those that entered it's tomb. When a Pharaoh was laid to rest, hieroglyphics would be placed upon the door of their tomb, warning people that they would be cursed. The most famous case is the group that excavated the tomb of King Tut. The curse on every Pharaoh's tomb read:

Death shall come on swift wings to him that touches the tomb of the Pharaoh. 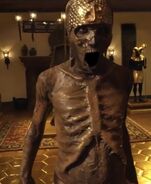 Retrieved from "https://escapethenight.fandom.com/wiki/Mummy?oldid=25437"
Community content is available under CC-BY-SA unless otherwise noted.