Deceased (Trapped in the Museum of the Dead)

Lucretia Rachel Jocelyn Karen Violet "Lucy" Carmichael is the Carnival Master's daughter, who once killed someone to earn her father's respect. Her pet and partner is the Demon Dog. She is played by Taylor Nicolette.

At the beginning of the episode, Lucy is shown in a jail cell with a straight jacket because she killed her boyfriend, Kevin. Then, a female cop comes in the cell and starts hitting Lucy with a baton, angry at Lucy for killing Kevin, the cop's nephew. Then Lucy snapped and she then ripped the cop's eyes out, killing her.

After Nikita wore the last artifact, Lucy suddenly reveals herself to the group along with her Demon Dog. She commands Nikita to come to her and Nikita starts being dragged towards Lucy because of the Collar of Control. After that, she went over to Mortimer and stated that something had crept inside of him. She got into a major fight with Calliope. She later was defeated when the group cleansed the artifact.

After the Collector gets revived, she brings back all the monsters from previous seasons as her "latest exhibit", including The Carnival Master, Benjamin, and the other monsters. Lucy is with them as they chase down Joey, Colleen, and Bretman Rock. Lucy stays close to the Blue Harpie. In the end, she gets caught in the trap that the remaining guests set up, and she gets trapped in a glass case. 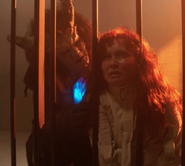 Lucy with her father, The Carnival Master

Lucy and her Demon Dog 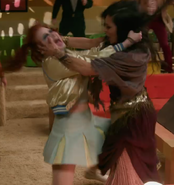 Lucy and Calliope getting into a fight 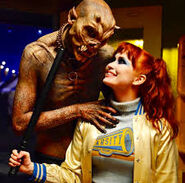 Lucy in the Museum of the Dead.
Add a photo to this gallery

Retrieved from "https://escapethenight.fandom.com/wiki/Lucy?oldid=25677"
Community content is available under CC-BY-SA unless otherwise noted.