Keeper of The Gorgon's Key

Member Of The Society Against Evil

Killed by The Minotaur

Cassidy also known as The Gorgon (Stheno, Euryale, and/or Medusa) is one of the Collector's monsters and a minor antagonist of Season 4. She is portrayed by Aimee Stolte.

The Collector opens a portal to Everlock to add more exhibits to her Museum of the Dead with the Gorgon.

As The Black Knight was dying, he blew a horn to summon the gorgon back from the expedition to Everlock.

It is revealed that she used to be and a member of the Society Against Evil by the name Cassidy before being drawn to Pandora's Box and when she opened it, its powers transformed her into a gorgon.

According to legend, The Gorgons were three powerful, spirits named Medusa, Sthenno and Euryale. Of the three sisters only Medusa was mortal. Medusa was once a beautiful woman with beautiful blonde hair and blue eye, who bragged that she was so beautiful that even the goddess, Athena, would be jealous. This angered the goddess, who vowed to punish the upstart mortal.

Soon after, Poseidon saw her and chased her to the temple of Athena, where he attacked her. Medusa begged Athena to help her, but her pleas fell on deaf ears. Athena then cursed Medusa and her two sisters. so that while they were still beautiful, no man could look upon her and live. It was said that anyone that looked into her eyes would turn to stone, but Perseus stared at Medusa's reflection and was able to defeat her. 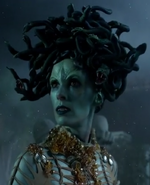 The Gorgon after being summoned by The Black Knight

Retrieved from "https://escapethenight.fandom.com/wiki/Amiera?oldid=21619"
Community content is available under CC-BY-SA unless otherwise noted.