Bretman Rock, nicknamed The Playboy, is recruited by Nikita Dragun to venture into Purgatory and rescue their deceased friends from The Collector’s Museum of the Dead, with the promise of there being cute boys there. Alongside him are Joey Graceffa, Matthew Patrick, Jael, and Ryu. Once the portal to Purgatory opens, Joey and Bretman both manage to make it in, but it closes before Nikita, Matt, Jael, and Ryu can get through, trapping Bretman and Joey in Purgatory, which Bretman becomes worried about. Upon seeing all of Joey’s dead friends inside their glass cases, he doesn’t know what to do. Once they are freed and start fighting with Joey, he puts it together that Joey had a part in all of their deaths, scared that he might be the next one to die. After the group uses the Gaurdian Angel Stone, he reunites with Matt and Nikita, happy to see them again. However, once they yet again realize that there are more keys than survivors, he get’s upset at Nikita that she brought him here. He is then promised by Nikita that he’d be saved. He is then voted into The Story Challenge against Alex Wassabi. However, Joey takes Alex’s place to prove to the group that he’s trustworthy. Bretman loses the challenge but survives. He is forced into The Pirate's Blood Challenge against Joey and Alex. He finishes first. He doesn’t show much remorse for Alex’s death, upset that Alex voted for him to lose The Story Challenge previously. He is then voted into The Raptor’s Feeding Pit Challenge against Rosanna Pansino. He wins and watches Rosanna die for a second time. He, Joey, and Colleen Ballinger discover the Soul Jar, but unlike Joey and Colleen, he doesn’t recognize any of the faces shown. He is then betrayed by The Sorceress, who had supposedly killed The Collector. However the Collector came back to life, and resumed her fight with the Sorceress. While they were fighting, he, Joey, and Colleen run from her new exhibit, which were monsters from different eras. Bretman get’s The Cosmic Sphere and uses it to open a portal to safety. He and Colleen walk in, but Joey stays behind. The portal closes and Bretman is left shocked, but alive.

Nikita Dragun invites Bretman to join them on their quest to the Museum of the Dead and rescue their friends, claiming that there would be cute boys there. He doesn’t exactly know what he get’s himself into, becoming frightened upon seeing the glass cases containing Joey’s dead friends. He becomes split from the group, along with Joey and Gabbie Hanna. The episode ends with him and the group releasing and then running away from the Mummy.

Bretman and the group enter the Sands of Egypt and meets the former wife of the Pharaoh. Later on, he and the group begin deciding on who to send into the challenge. Bretman decides to vote for Timothy (despite him being his "Asian Brother). Timothy doesn't go into the challenge however, instead Tana and Justine's cards get pulled. He wishes them luck and tells them that he'll see them on the other side.

Bretman and the group infiltrate the Garuda's nest. While there he collects some gold coins that had rained from the sky. Later he gets captured by the Garuda and has some of his coins taken from him.

Episode 4 - A Wedding To Die For

Bretman was captured along with all the other males and was forced to find the dragon spear, but in order to do that they had to complete 4 tasks (Bretman completing the first task). He gets jealous when he learns that he wasn't able to "entertain" the Emperor.

At voting, Bretman and the other guests (except Colleen) vote against Joey. Despite the five votes against him, Joey doesn't go into the challenge and Tana and Gabbie's cards are chosen instead. Wanting to save both of their friends, Bretman and the group leave the lounge to help Tana and Gabbie, only to see them get killed by the Black Knight instead.

Bretman was chosen by Nikita to go into the maze alongside Joey to rescue Alex. Bretman goes in second to go into the maze to rescue both Nikita and Alex. Although, after he opens the second gate, he is captured by The Minotaur. Bretman, Nikita and Alex are all saved by Joey only to find out that Joey has the option to either vote himself into the final death challenge or voting Alex and Bretman in. He chooses to vote himself in. Once Colleen is revealed to be voted into The Minotaur's Maze Challenge, it was most likely that he voted Colleen in.

Episode 7 - Be Careful What You Wish For

Bretman was chosen to tell a story to the group using items that the challengers found, even though his story was said to be better than Joey's. Joey won the challenge by getting 2 votes from Ro and Alex. Bretman, however, was saved from death when Fatima didn't write his name but Scheherazade's name instead.

Bretman was forced to undertake the Pirate's Test. Finishing 1st in all 3 parts of the test. Despite allowing Joey to catch up to him by forgetting to take sail on the third part of the challenge, he still finished the entire challenge in 1st place.

Jael and Ryu informing Nikita, Matt, Joey, and Bretman about the Collector's Museum of the Dead.

Bretman as he appears in the Season 4 intro.

Bretman at the Season 4 lounge.

Bretman votes for himself.

Bretman in The Story Challenge.

Bretman and the group react to seeing Colleen Ballinger for the first time after being revived.

Bretman in The Pirate’s Blood Challenge.

Bretman and Joey Graceffa reacting to the second death of Alex Wassabi.

Bretman uses The Pirates' Key on one of The Collector’s Vault’s locks.

Bretman and Rosanna Pansino on set. 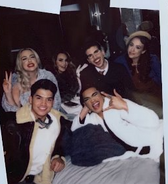 Bretman unlocks one of The Collector’s Vault’s locks with The Dinosaur Key.

Bretman uses The Cosmic Sphere to open a portal out of Purgatory.

Bretman and Colleen Ballinger escape Purgatory without Joey Graceffa.
Add a photo to this gallery

Retrieved from "https://escapethenight.fandom.com/wiki/Bretman_Rock?oldid=27431"
Community content is available under CC-BY-SA unless otherwise noted.